This color is amazing! Love the color, the dark red matching with the darker season. Dark red, kind of warmer color. Yes, this color with a black dress, bring it on!

Three colors, red, yellow and orange. This three colors are also on my kurta. I must confess I do not normally use bracelets and specially big, extremly big. But, today is an expetions, becasue I can not have things lying in my apartment and not using them. That makes no sense!

The bracelets are made of wood and make a lot of sounds every time I move my arm, so that is why I do not use them that often. But the breacelts are kind of nice even with the oversize and sounds.

I got the bracelets at Gina Tricot for five years ago or so and they are almost never used. That is just very sad.

Red can never be wrong

I get this periods of using something almos every day, which I normally don’t. This time after the halloween party with the black nail polish. I realized nail polish is really nice to have, it add some color. So, last night I was searching in my box with nail polishes (I have got a lot of that too)… And found different shades of red, everything frommore orange red to dark dark almost brown red and blood red. Becasue of the dark season, fall/winter. I decided the best color is not too brigt

I use this Sally Hansen and the color is very nice, but I do not know how good the queality is or where I got it from. Anyways, who cares as long as the color stay for sometime, which it has.

Easy to see a girl is getting ready

Before the party just like any other girl, I needed to get ready with a shower, dress up, pack my bag with indoor heels and so on. However, I am facing a bit of a problem with where to stay while to applying my makeup. I do not have table for my makeup also there is a issue. Therefor when i am applying makeup I next to my window standing or sitting on the flooer. This time In the end I was sitting on the floor with a limited amount of my makeup around me while the rest was next to the window.
I used black, dark brown eyeshadow and other, also super red lipstick. The very last of my eyeliner before it went in to the basket and also I needed to throw 2 mascaras becasue they were empty! Thank God I had some extra mascaras at home, that is why girls need a lot of extra mascars eyeliner and so on, so both eyes can get mascars or eyeliner.
Best to say, I did NOT leave my flat in this condition, More right, the mess was gone and some makeup was with me just in case the makeup needed to fill in and so on.

So today I have change the nail polish to add some color. Should it be res, pink or blue?
blue is too much however, whitish is pretty nice. 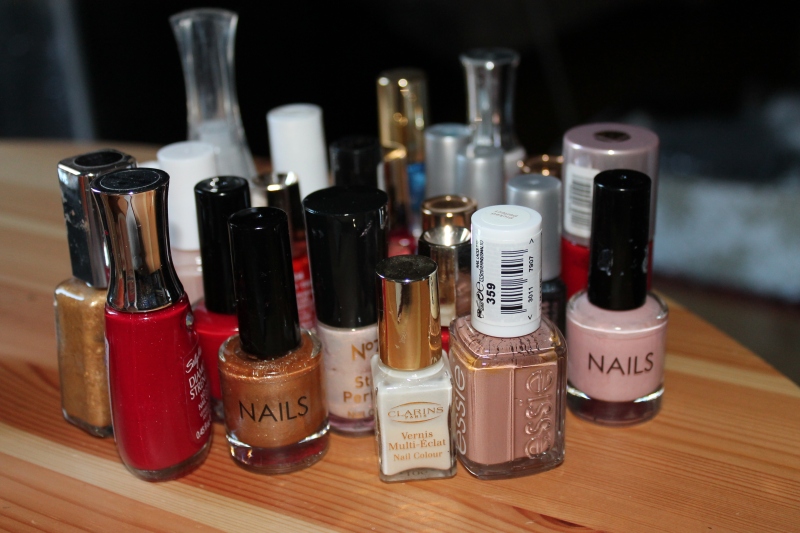 There are some brands which are horrible, but it feels too stupid to throw them out. Because it is better to use them till the bottle is empty.
Also, thank god I do not work in the fast food anymore, the reason is, in fast food the worker is not allowed to have nail polish due to hygiene aspects.

Trying to put color on my life with the fall has arrived. The air has become come much colder and leafs are falling from the trees.
The leather cloves and hat are not in boxes anymore. During the day the weather is around 15 degree an in the evenings falls to 5-10.T

he nail polish is not my favorite but, it is okay color. At least it is not black just like all the fall clothes.

Yesterday, I was in the hostel but we as many other had a fire.
They light the fire at 8 and they walked around it and I do not know what.
What I did was just to observe what they did. It was pretty interesting, and try to get an answer why Holi is celebrated and with fire.
Some of my friends did not have any answer why they Holi is celebrated, even if some of them from Punjab. what I understood was Holi is from Punjab and is not original celebrated in the south of India.
What I understood from my friends more or less, in simple explanation was demons tried to kill the son. The son pried to a god. female demon tired to kill the son in the fire and the female had a mantel cover around her, but the son god came and cover the son with the mantel and the demon died instead. Very simple explanation.

Then today is holi with all the colors. The girls here, started to play around with colors at 9-ish and it is not safe to leave the room if you do not want to get color on you. But they are suppose to celebrate holi in the basement, but they play everywhere in the hostel.
Many in second and third year are not going to play because of our exams (they start from tomorrow and keep on till end of March).
Also, I asked why they are celebrating holi with all the colors. My friend answered, it is to forget and forgive all the negative perception, thoughts you have towards other people, person. And start on a new page, enjoy.
More or less, what she said.